I might as well have moved into Politics & Prose this week, friends. One of the great joys of living in our nation’s capital is that some pretty fine authors make their way through during their book tours. With all of the conferences I’ve been to and the amount of Twittering I’ve done, I feel like so many authors are my friends, so it’s great to get to see them in real life. I also *have* to ask the author a question—this is a leftover from business school, where, as one if not the only Black person in the room, I felt the need to make myself known for something other than the color of my skin. It’s also a way to break any feelings of shyness, which are rarely helpful. But as a writer, it’s been a great way to glean writing advice, too.

First up, last Friday, were readings from Ink Knows No Borders contributors JoAnn Balingit and Elizabeth Acevedo. JoAnn is my VONA and Bread Loaf fam, while Elizabeth is a bit of a literary celebrity after her YA novel, The Poet X, won a National Book Award this year.

I asked these authors, “One thing I admire about both of you as artists is that you both do more than one genre; JoAnn writes nonfiction as well as poetry, and Elizabeth does both poetry and fiction. It’s easy to see how poetry influences the other genre, but how has the other genre influenced your poetry?”

Elizabeth said poetry had always been a part of her life, as a fan of hiphop since she was very young, but as she writes more fiction, she’s noticing her poetry becoming more narrative. Her current work in progress is a narrative poem based in folklore (about a woman who eats men, if I’m remembering that correctly, but I might have made that up; either way, it sounds awesome). For JoAnn, writing her memoir has required a lot of research, and she’s found that research helpful in building new poems about her family. JoAnn Balingit reading a poem from Ink Knows No Borders

Elizabeth Acevedo reading a poem from Ink Knows No Borders

Last Thursday, I went back to P&P at the Wharf to see T. Kira Madden read from her new memoir, Long Live the Tribe of the Fatherless Girls, and Mathangi Subramanian debut her novel, A People’s History of Heaven. I’ve been a huge fan of Kira’s since I read her Guernica essay, “The Feels of Love,” which is still my favorite essay ever, as harrowing and traumatic as it is. I was just being introduced to Mathangi, but I loved the lyricism and richness of her prose.

I liked these authors, “How did you develop the lyricism and cadence in your voices?” And added for Kira, “I’ve found the brain has a mechanism to forget traumatic things; how were you able to get yourself to recall these things to write your memoir?”

About remembering traumatic events, Kira said she is one of those people who remembers her childhood more vividly than yesterday. Her brain didn’t repress the trauma, it held onto it. Now, I found myself really jealous for a moment—do you know how hard it’s been remembering things that happened more than 25 years ago when you’re 33?—then reminded myself that my brain handled things the way it needed to, just like hers. She just had an easier time writing a book!

Mathangi Subramanian reading from her novel, A People’s History of Heaven

T. Kira and me: how friendships develop from Twitter!

On Friday night, I headed to P&P at Union Market, to Elizabeth McCracken’s rescheduled reading of her new novel, Bowlaway. (She’d initially been scheduled for last month, but got stuck in the Iowa City airport for, like, 10 hours, in a snowstorm. Pobrecita.) I met Elizabeth in January at Tin House Winter Workshop; she wasn’t my instructor, but there were only three of them, so we got to chat. What a lovely and HILARIOUS woman. She is a fiction writer, but she wrote a memoir in only 3 weeks several years ago, about losing a child.

I asked her, “How did you develop the emotional distance from the vulnerability of your memoir to being able to sell it, since books are ultimately products?”

“I had to develop a type of amnesia,” she said. She just wouldn’t think about the fact that people were reading what she’d written. If she had, she wouldn’t be able to sleep.

I thought if I could do this with my memoir and I realized that I couldn’t—I’ve workshopped it so much and so many people have read at least portions of it, that I can’t trick myself into thinking that no one will read it. I can, however, blow caution to the wind and say, “Eh well, I’ve got no control over what they think of it, so I’ll just go about my business, I guess.” Which is the same thing Elizabeth said, only in Vonetta words.

And finally, Sunday evening, I went back to P&P at Union Market (thank God none of these at P&P on Connecticut Ave; that would be a lot more commuting since I live nowhere near Upper NW). Mitchell S. Jackson read from his new memoir/essay collection Survival Math, and was in conversation with Merita Golden, the founder of the Hurston/Wright Foundation, which does great work with and for Black writers in DC. I’d never met Mitch, but I’ve read his work (most recently his story in VQR last year, but his New Yorker essay is in my Pocket) and I LOVE his voice, which is—arguably—the most authentic and confident I’ve ever read.

I asked Mitch, “How have you maintained the authenticity of your voice, knowing that you’ll probably have white editors? How have you combated any calls for you to change your voice?”

“I knew my best shot was to be the most me, all the time,” he said. He wanted his readers to know that he wrote this piece, so he had to ask himself and determine, “How are they going to know that I wrote this?” To find one’s voice, he said think of home: “What’s the cadence of home? What’s the language of home?”

I thought about one of my works in progress, a short story I’ve been working on for years that features two elderly aunts. They speak the way my elderly aunts spoke when they were alive, in a Black Vernacular English that I could almost clap with rhythm of their language. When I write an essay in my voice, I remind myself to think of them because they’re very much still a part of me. I have to remember that my confidence comes from their approval and no one else’s.

My very literary week was both entertaining and highly educational. I feel like I grew at least an inch in good writerliness.

I leave tomorrow for AWP. I’ll largely stick with last year’s strategies because it was so effective. I’m on vacation in the Pacific Northwest after that, so I’ll report back on everything on April 9! Til then! 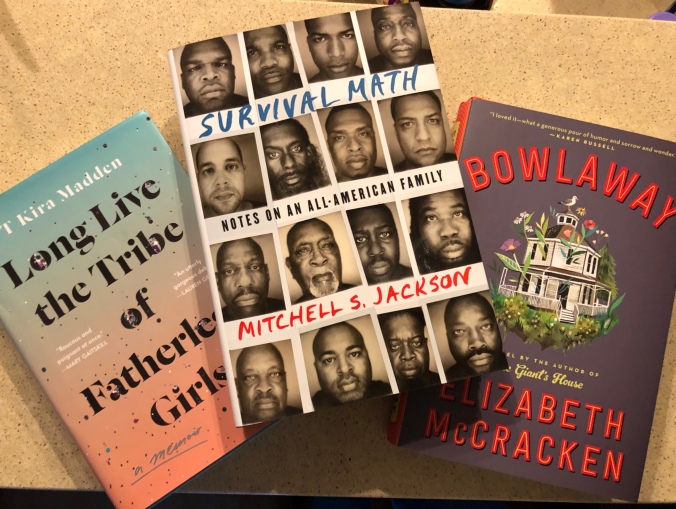 One thought on “Readings Galore: My Very Literary Week”